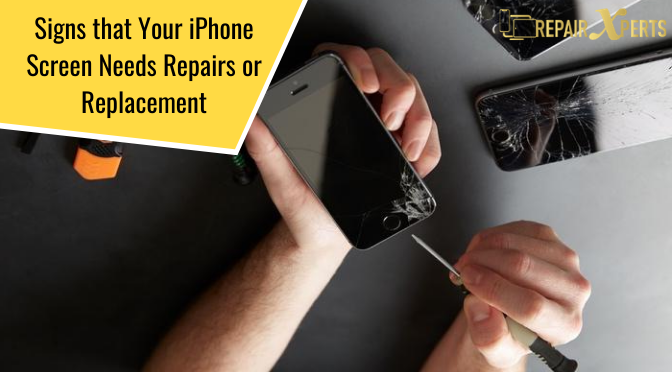 iPhones are prized possessions. They are equipped with state of the art technology and are really gadgets to be proud of. Still, all said and done, they do not last forever. One of the most frequent issues that you face with your iPhone is its screen. Over the years, the screen develops a lot of snags that need to be taken care of. Here on this page, we discuss in short, various telltale signs that tell you that it is high time to repair or replace your iPhone screen taking the help of a seasoned professional.

This is one of the most frequent issues that our techies have to deal with at Repair Xperts. People would come up with cases, wherein the screen of their iPhones have entirely gone dead or is generating a delayed response.

In case of delayed response, they often are of the illusion that this is caused by insufficient RAM, and thus delete contents instead of addressing the right cause, thus complicating the problem further. Hence, we would suggest getting your iPhone for screen repairs or replacement in Sydney without any delay whatsoever, in case of delayed response by your iPhone screen.

Dark Patches in the Screen

In some cases, you find dark patches of various sizes and shapes under the surface of your iPhone screen. At times, the patches are formed on the outer surfaces as well, and they are too stubborn to be washed off by the screen cleansers. When that happens, the patches stop the screen from registering the touch of your fingers, thus resulting in eventual malfunctioning of the screen.

Reduction of Clarity and Change of Colour Quality

One of the principal USPs of iPhones, along with many others, is the clarity of the screen display. In fact, no android phone of whatever make would come even close to the best iPhones in terms of screen clarity.

However, you will find at times, the display getting dull and a bit subdued, more so if you have been using your gadget for a few years. Also, you will find a change in the colour quality with images not appearing as bright and glittering as they used to be. Maybe it’s the sign of an aging screen that has lost its ability to adjust the brightness and balance the colours. If so, it’s time to get your iPhone for screen repairs in Sydney or elsewhere depending upon your location.

You will find your phone opening up applications randomly all by itself or dialing numbers automatically. You will surely not like to see your phone dialing up your boss’s number at the dead of night. All these are signs of a screen that has gone haywire. Instead of keeping this unpredictable phone locked, what you need is a technician for immediate repair or replacement of the screen.

And then, the ‘good old’ issue of the cracked or shattered screen that has to be replaced anyway. Does it need any further explanation? Hope not!

What better name can you get you to turn to than Repair Xperts? Just give a call at 02 87197880 and book an appointment. We will see the rest.