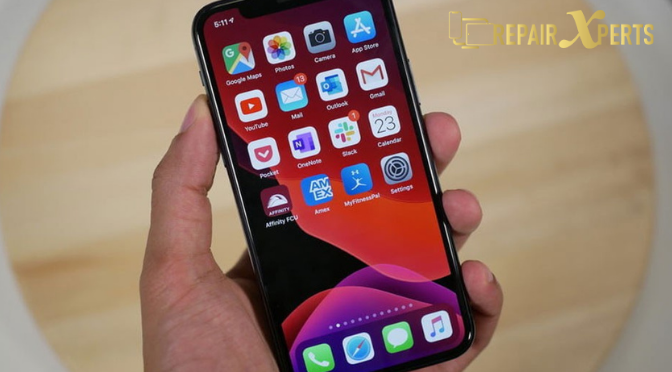 One of the hallmarks of a reputed iPhone repair store is its authenticity.  There are various ways to measure the authenticity of a store. One of them is the replacement of faulty screens and other spare parts with their genuine counterpart. We at Repair Xperts do the same and this is the reason we are regarded as one of the most trustworthy iPhone repair stores in Sydney & the suburbs. Now the question is why you will know that the iPhone replacement screen is a genuine one. Let us go through the ways…

One of the most effective ways of evaluating whether your iPhone 11 Pro screen replacement in Chatswood is genuine or not is to put the screen on maximum brightness and then open a black picture. Then you can also zoom in on a particular image to see whether the entire screen is black. If the screen looks absolutely pitch black like as if it has never been turned on, this indicates that you have a genuine OLED screen, if on the other hand, even the faintest bit of white or grey is noticed, that will indicate that the screen is not a genuine one.

Focusing a torch or a flashlight on the screen

Another very effective method of checking if your replaced iPhone 11 screen is genuine is by focusing a lighted torchlight or flashlight on the screen of your iPhone. You need to take a hard look at the reflection of the light from the screen after focusing on the light. If your iPhone repair store in Chatswood replaces the faulty screen with its genuine counterpart, the screen will not have any grid line running across the screen. On the other hand, a duplicate screen will have visible grid lines running across the screen.

Some other obvious signs that your iPhone 11 display is genuine

» As and when you swipe through the menus of a genuine screen, you will find no image ghosting or any trail left behind the movement routes of your finger.

» A duplicate iPhone screen will have a bluish hue that will be very much visible on the screen. Or you will find a faint yellowish tint, which is a clear cut result of improper display colour calibration. If you do not find these aberrations, it is likely that the display your iPhone 11 Pro screen repairs in Chatswood or elsewhere near Sydney has been your money’s worth, and your faulty screen has been replaced with its genuine counterpart.

» Another very effective way of evaluating the originality of an iPhone 11 screen is its display height. Aftermarket, duplicate iPhone screens are generally raised a bit higher than the original Apple OLED displays.

» Also, in a duplicate screen, the adhesive-based dust removers would tend to stick longer on the non-genuine screens than their original counterparts. This happens because of the poor quality oleophobic coating or the lack of it.

Therefore you see, these are some of the easiest ways to ensure if the iPhone 11 Pro screen repairs store in Chatswood or anywhere else that you had visited has justified your investment or not, by conducting a genuine screen replacement.

At Repair Xperts there is no such probability as our reputation advocates for our reputation for original replacement of iPhone 11 screens. Call us at 02 87197880 for an appointment or search us online by using phrases like ‘Fix My iPhone Chatswood’.